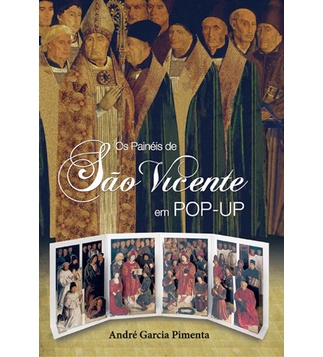 These are "The Panels of São Vicente in Pop-up", a recreation of Andrew Garcia Pimenta of the work attributed to the royal painter Nuno Gonçalves (15th century), on display at the National Art Museum of Lisbon. In this recreation, the "two-dimensional painting 'becomes' a three-dimensional object", and the fifty eight characters around the double figuration of St. Vincent, a representative assembly of the Court and the Portuguese society of the fifteenth century, stand out from the background, supplementing it at various levels according to their proximity to the viewer.
The six paintings constituting the panels are called Panel of the Friars, Panel of the Fisherman, Panel of the Infant, Panel of the Archbishop, Panel of the Knights and Panel of Relic. Over the years, many questions were raised about the identities of the personalities represented by launching an interpretive challenge inconclusive to this day. However, we can be sure that this "collective portrait" is an epitome of painting of his time, both in the Portuguese panorama and internationally.

It was with this awareness, and respecting the nature of the painter's stroke, that have been rebuilt 35 characters in this pop-up. In this three-dimensional recreation, a new and surprising perspective is proposed for these exceptional, solemn and enigmatic personalities.

An unusual and surprising three-dimensional recreation, a new perspective on the masterpiece of the fifteenth century Portuguese painting.