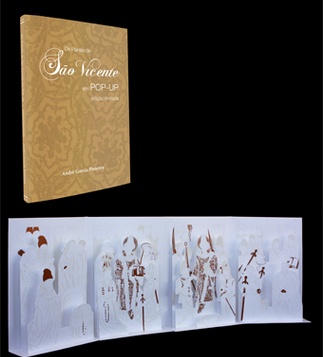 These are The Panels of São Vicente in Pop-up, a recreation of Andrew Garcia Pimenta of the work attributed to the royal painter Nuno Gonçalves (15th century), on display at the National Art Museum of Lisbon. In this recreation, the "two-dimensional painting 'becomes' a three-dimensional object", and the fifty eight characters around the double figuration of St. Vincent, a representative assembly of the Court and the Portuguese society of the fifteenth century, stand out from the background, supplementing it at various levels according to their proximity to the viewer.

An unusual and surprising three-dimensional recreation, a new perspective on the mpanels of São Vicente, masterpiece of the fifteenth century Portuguese painting, in a limited edition of 550 copies, signed and dated by the author.