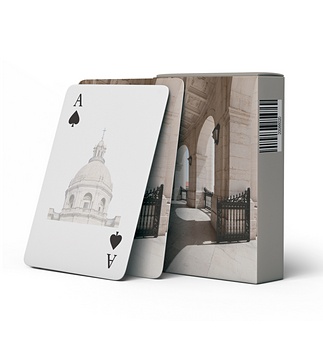 Personalized deck of cards, inspired by a detail of the facade.

Classified as a National Monument in 1910, the Estado Novo regime decided to finish the building and continue with the law of 1916, which had determined the adaptation of the temple to the National Pantheon. Built to repair the affront suffered by a storm in 1681 and to erect a majestic temple, the bold baroque project, by João Antunes (1643-1712), whose construction began in 1682, remained without a roof until the early 1960s. The works lasted so long, about 284 years, that they gave rise to the popular expression "Santa Engrácia's works" to designate something that never ends.